Steve Cotton thanks the ITF family for his election as general secretary. #itfcongress2014

Over 40 women delivered their wins, challenges and key priorities for the next 4 years.

My life had been connected to Rail Transport system in many ways. I lived close to a railway station for a greater part of my life and majority of the people in my neighbourhood were employees of the then Ghana Railways Corporation. I knew that the employees of the Ghana Railways Corporation lived appreciably good life in the 70s . Rail Transport in Ghana in the 1970s was efficient, safe, timely and it was real fun to travel with what was then described as the " Blue Train" simply because the colour of the coaches was blue. I can recall that rail transport was the preferred mode of transport to the extent that there was a popular music in Ghana to honour the "Blue Train" as a safe and efficient means of transport. In my student days, I benefitted from a facility which allowed all students in Ghana to travel to any part of the country connected by rail transport at half the official rate. That translated into a huge contribution of rail transport to Ghana's education.

As I grew up, I expected the infrastructure and operations of the Ghana Railways Corporation to grow in leaps and bounds. The opposite rather became the reality. The deterioration of Rail transport in Ghana is unimaginable to the extent that the rail lines have been removed in some areas.

I participated in the Conference of the Railway Section of the ITF at the 43rd ITF Congress to solidarise with my comrades in the Railway section and to understand the current dynamics in the rail transport sector. Everybody who spoke at the conference was very passionate that privatisation which is being proffered as the solution to the problems of Rail transport would sound the death knell of Rail transport and I agree with them. All over the world, rail transport provide public goods with immeasurable social and economic benefits. Privatisation would compromise safety and deny critical transport service to sections of the people in my country because a multinational company that operates on bottom line objective of profit would not care about what happens to poor communities without transport service.

A strong case was made for public ownership of Rail transport. There was expression of commitment by the Railway workers to oppose privatisation of rail transport " even if it would mean that they would have bullets shot on their chests" as a leader of railway employees in India strongly put it.

Participants discussed how workers are uniquely placed to build power across supply chains at a lively debate on logistics today.

The ITF’s Ingo Marowsky explained the Federation’s new approach: “Logistics workers are integrated into global supply chains with complex power structures. Unions need to target the ‘real employer’ who has the power to change terms and conditions across the chain.”

“That is why the ITF has created a new unit for supply chain campaigning. We are building new alliances, and tapping into the power of unions in industries like retail, manufacturing, and energy”.

Christine Behle, head of transport at ver.di, highlighted Amazon as one of the most important lead firms. 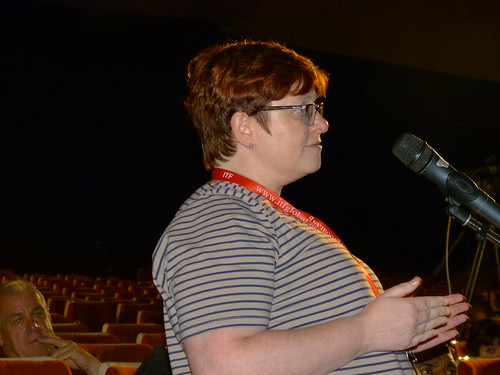 “Amazon is changing the face of the logistics industry, with bad results for workers. In Germany there have been strikes in 14 different warehouses, but Amazon says it will now move its distribution to Poland. We need to have an international strategy for this company,” she said

ITF president Paddy Crumlin said the global union movement has all the tools to build power across supply chains: “When you look at what the ITF has achieved in the FOC campaign, using the joint power of dockers and seafarers, there is absolutely no reason why we can’t build power in global supply chains.” 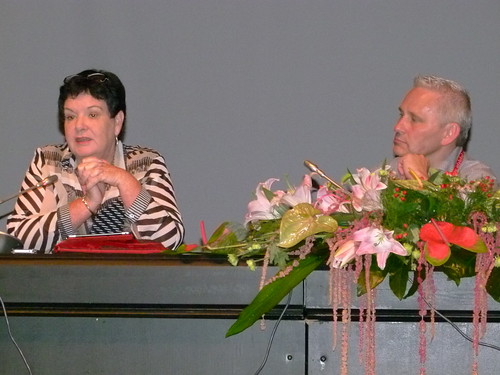 “The ITF, along with UNI Global Union, is leading the way on logistics organising with the DHL campaign. It is also very important that the global movement develops an effective strategy to organise Amazon. The ITUC is fully behind the global union federations with these important campaigns”, said ITUC general secretary Sharan Burrow.

Steve Turner of Unite the Union said it was about turning just-in-time into just-too-late. “Logistics workers have enormous power, and they are learning how to use it very effectively”.

Resisting privatisation and liberalisation, driving up safety standards and rebuilding membership were the key priorities laid out by rail section delegates today.

Nikolai Nikiforov, president of the TURTCWR, Russia talked about the common challenge that unions face. 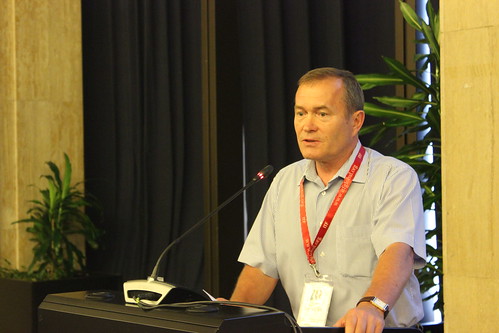 “If rail in Russia was privatised, large parts of the network would be shut down, and it’s the same for our brothers and sisters in the Commonwealth of Independent States. We had to campaign against this and we succeeded because parliament stopped privatisation going ahead. International solidarity made an important difference to our campaign.”

Delegates also supported the need for a privatisation monitoring information network, which had been proposed in the fighting privatisation workshop

Safety is another area where there is a pressing need for action. Rail section chair Oystein Aslasken said that “poor safety is a growing problem for rail workers. Managers have a ‘clean hands’ culture. They believe their rule based systems mean only the workers are to blame. This is unacceptable. It is the systems themselves that are to blame. 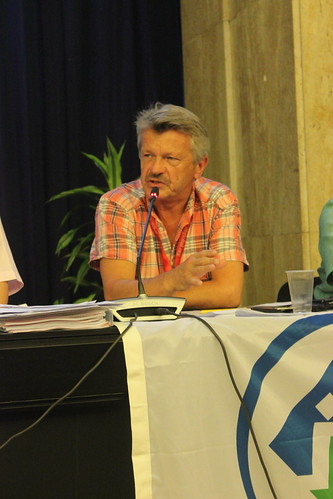 “The rail section has developed a new safety policy,” he continued. “I urge all affiliates to use the tools in this policy, and to tell us how we can improve it”. 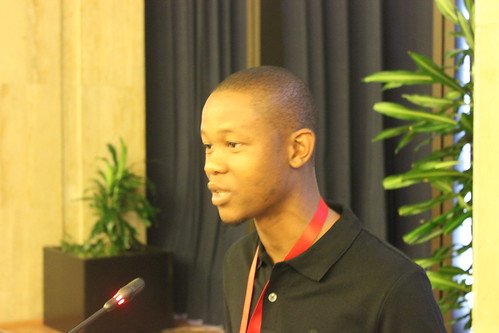 SATAWU’s Andrew Dinaala said: “We need to rebuild our unions. We must communicate effectively with young workers, understand their issues, and build strong young union leaders.”

Watch the film on rail and road union victories here

We’re making real, tangible progress and now it’s time to step things up a gear! That was the overwhelming message from the fisheries section conference.

A presentation from ITF/IUF fisheries programme leader Liz Blackshaw covered the progress to date of the Catcher to counter campaign, launched in 2011 with the aim of organising fishers and driving up labour standards along the supply chain.

Blackshaw said: “Of all the industries this is the one that’s most difficult to trace. We have to work together as a trade union family, not just in ITF but beyond that too. This has been in the too hard basket for too long, but we can do this.”

She called for a bigger and bolder approach before introducing the ITF Papua New Guinea film outlining the success story in the fishing industry in PNG.

There was positive reaction from the floor with Tracey Mayhew from SIU summing up succinctly: “Liz said [in her presentation] we just have to say yes, and I say yes!”

Firm commitment was made to further campaigning around ratification of ILO convention 188 to contribute to elimination of illegal fishing, eradication of forced and child labour and the fight against anti-union practices in multinationals.

Chair of the European fisheries section Juan Trujillo said: “We must push on for ratification. When we go home we need to remind our governments and the public that this has to be done. The fight against illegal and irregular fishing is something that we all need to support.”

Access the fisheries toolkit for materials to support your campaigning work on the ground.

Participants were asked to support the call for the reinstatement of Filipino workers dismissed at seafood giant Citra Mina. Find out about the Citra Mina campaign >>

A congress motion to allocate appropriate resources to progressing the debate about FOC in fishing and to review inspectorate support for the section was passed.

Road transport workers reflected on wins over the past four years:

and planned their future organising strategies.

Tony Sheldon, the new chair of the road workers`section, exposed the safe rates campaign of the Transport Workers Union of Australia.

Frank Moreels, ABVV-BTB, one of the newly nominated vice-chair, talked about solidarity action in Kenya. He quoted an old African proverb : « if you want to walk fast, then walk alone. If you want to walk far, walk together ». He also exposed how unions in Holland and Belgium have organised a campaign against social dumping by IKEA.

Work hours were a predominant issue in the conference as they impact safety for passengers and drivers. Wilma Clement Barbados from the Barbados Workers' Union recalled: "We need to act on fatigue. In Barbados, we tragically lost a bus driver who felt asleep on the wheel" 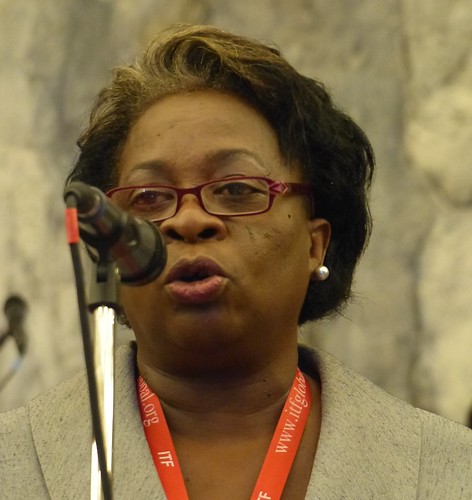 Workers discussed how to build strategic campaigns across the globe. According to Wonho Park, from KPTU, Korea, « we need to stop the flow of goods to change the world. We are slaves working on wheels. » 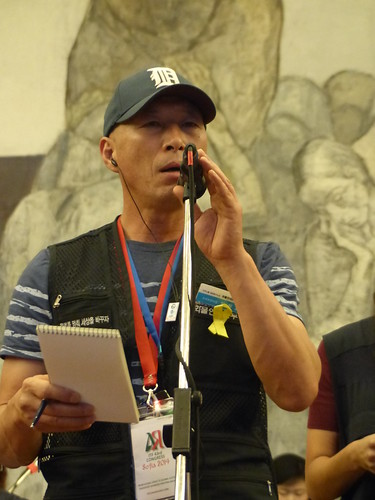 Sheela Sanjay Naikwade, from Maharashtra State Transport Kamgar Sanghatana, India reported on the need for facilities for road workers: « we need appropriate shelter and toilets, for men and women » 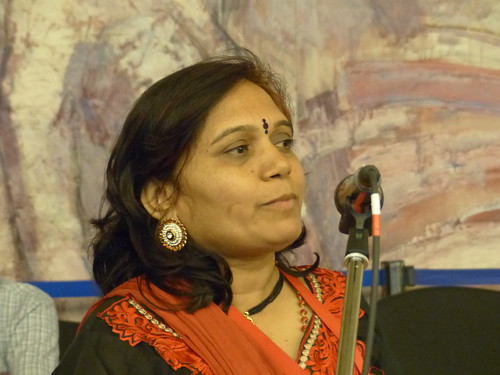 Tony concluded the conference by setting the tone of his new mandate : "We declare war on economic greed."

The acting general secretary of the ITF closed the meeting by giving a gold badge to congratulate Martin Meyer, UNITE the union, UK, for his transformative work as chair of the road transport workers`section. 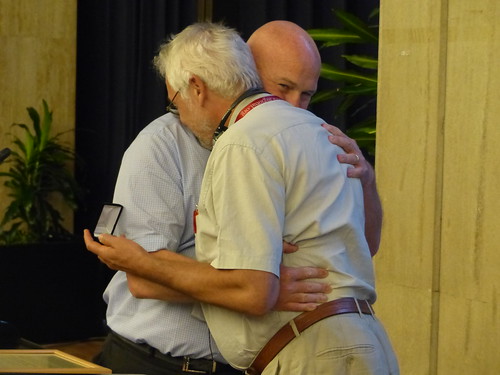